How to photograph Northern Lights 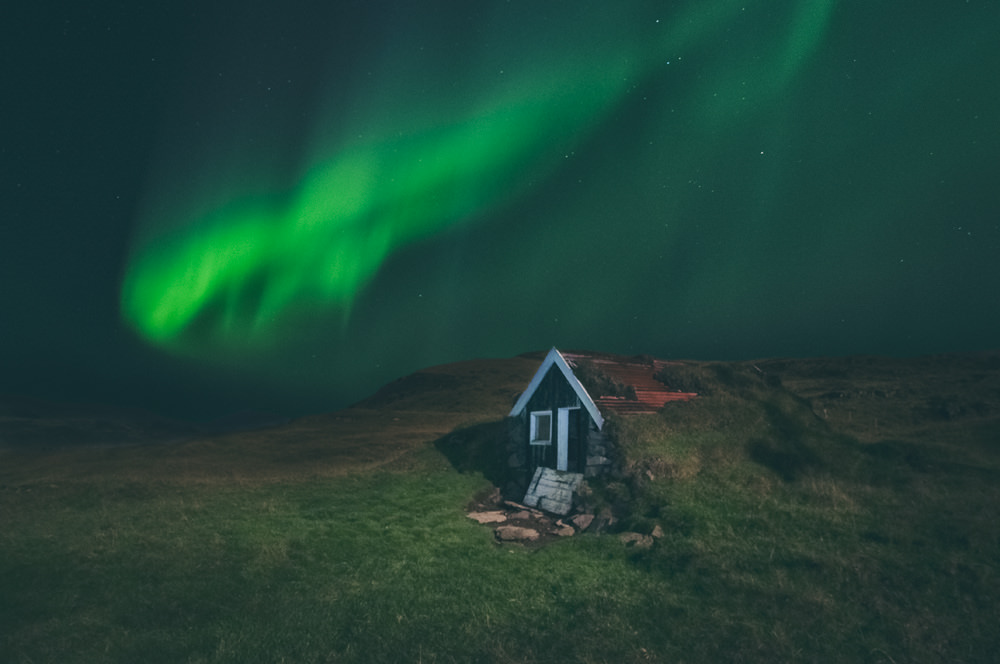 Northern Lights are a completely thrilling phenomenon. It’s not a great surprise that everyone wants to have their own trophy of the night hunt. The beginnings are often rather difficult. How to photograph Northern Lights? After reading our guide, you’ll never end up with a blank or blurry picture, and you’ll be on a good path to create something outstanding.

How to photograph Northern Lights – step by step guide

To understand the process, it would be good to have some knowledge about the basics of photography. Aperture, shutter speed, ISO – without understanding these terms you might have some problems with following the guide, but I’ll try to get everything across as simply as possible. There is no single effective recipe to photograph the Northern Lights. It’s not like with baking a cake – 500 g flour, 3 eggs, 200 g butter, etc. There are too many unknown factors – above all intensity of the phenomenon, camera and lens you use. That’s why I can’t give you exact parameters which will result in a technically good photograph. But don’t worry – I can give you a general formula, which after a few trials and errors will allow you to catch the Aurora. I’ve met many people who point their camera to the sky, take a picture in auto mode and wonder why there is no Aurora in their shot. The most important thing – turn the manual mode on your camera and put it on a tripod, then you are on your way to succeeding. 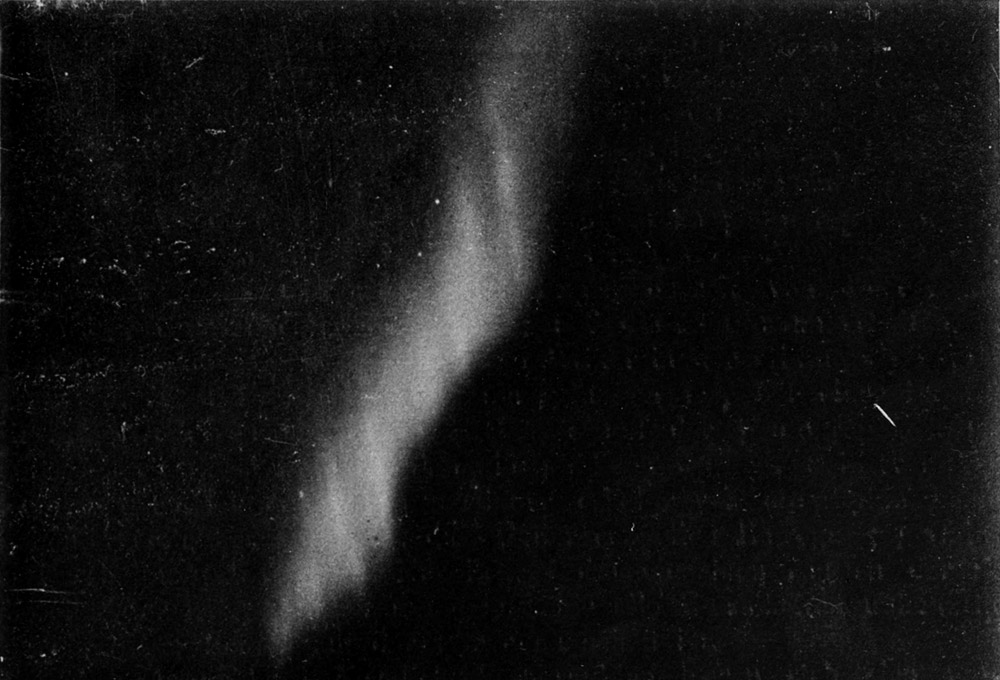 Taking your Northern Lights photographs to the next level

When you start to feel comfortable with photographing the Aurora, it’s time for the next level. To register the phenomenon in an image is one thing, and to take an interesting photograph of the Northern Lights is something completely different. Just one short trip and one meeting with the Aurora is not enough even to master only the technique. But if you are patient and practice, you can get great results. Remember that you don’t need the Northern Lights to practice. Simply photograph at night, and when the moment comes, you’ll have the skills, and you can concentrate just on the art of photographing this incredible show.

You’ve probably seen such pictures many times – some dim green light and tips of the trees in the foreground. There are lots of such images on the Internet. Just close your eyes and recall the night spectacle which you have seen. Do these photos resemble even slightly what you have seen? Not really? What should you do then to hypnotise someone watching your trophies?

What can come in handy?

Don’t give up if the results aren’t as jaw-dropping as you thought they would be. Great pictures of the Northern Lights are rarely taken on short trips when the opportunity arises. Often many days or even months pass between the idea and its realisation. But sometimes you can have a lot of luck – be in the right place at the right time. You come to the hotel, which is situated somewhere in the middle of nowhere, in the afternoon and it turns out that right next to it is a beautiful church or a turf house. The forecast says that at night you can expect a great show. And here it is! Once I came across an incredible spectacle when I went out from my tent at night just to pee 😉 Miracles happen.

We keep our fingers crossed for you. Don’t forget to share your trophies with all of us when you come back. Post your Aurora pictures on our Facebook page.

Have a look at the first part of our guide, where you can find everything you have to know to prepare for the Northern Lights hunting. 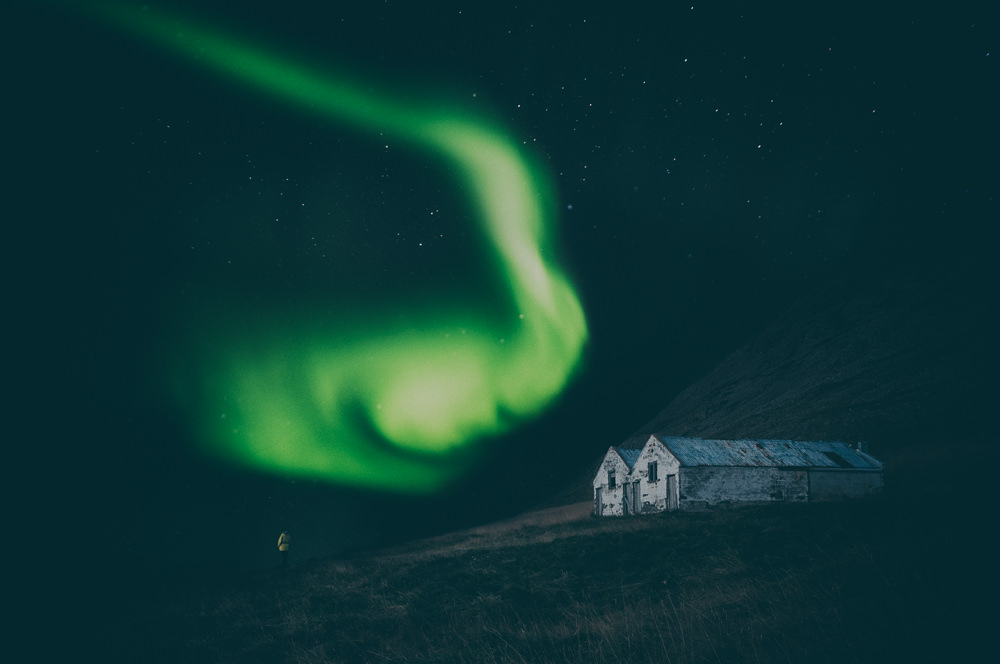 We saw these jaw-dropping Nothern Lights in the end of September in the Westfjords.

Your photos are absolutely stunning! I have always wanted to see the Northern Lights, and being able to snap some nice photos of the experience would be amazing. Iceland is hopefully one of our next travel destinations, I have this post bookmarked for future reference!

That’s a very helpful guide! It would be a pity to go hunting for northern lights and be unable to catch them on camera. I know that with guided tours, sometimes they guide you on how to take proper photos without ruining everything. That’s helpful as well, since not everyone is a good photographer!

I would love to be such a good photographer. But buying all the material is out of price… and I like to travel light enough. Therefore, I just have a FZ72 Panasonic Bridge and it does the job pretty well. But of course, it will never do so great pics in Iceland !

Thank you Lucile! You are right, the equipment is pretty heavy. But it’s still nothing when you compare it to 19th-century landscape photographers. They had to transport a tone of equipment 😉

Ok wow, now I feel woefully unprepared to ever shoot the Northern Lights. I need to learn more about aperture and ISO first. But great suggestion on bringing a headlamp to set up your tripod–I wouldn’t have thought of that (until I was there and needed it)!

Awesome post! I’ve never been much of a photographer and even running my blog, I always feel I as though have never really done any of my destinations justice. Certainly, I’ve always been amazed at how people catch these great snaps of the Northern Lights as any night sky shots I’ve ever attempted have just appeared as a dark smudge. This advice will really come in helpful when I finally make it to Norway in October

I think I would be so excited about catching these lights that I would have forgotten all the things that you have suggested. Am glad that I have a ready reckoner now to mindlessly pack it all before heading to catch these lights. I hope to do so sometime soon.

The photography tutorial is a next level thing. The whole article is the best read for even an amateaur who wants to capture the amazing phenomenon. I am definitely going to bookmark this.

Thanks for the detailed guide on photographing the Northern lights. It’s on every travellers bucketlist and this really helps in planning well. I have bookmarked this guide for a later time 🙂

I usually don’t travel with a tripod but I would definitely need to get when I visit the Northern lights. I have found it hard to get any photos without noise in my previous camera but my current camera is definitely better. Still learning all the apertures and Iso ideal. But your tips will definitely come in handy.

I can’t thank enough for this fantastic guide. I have just come back from Finland and did not have the luck to spot Northern Lights. I am kind of jealous of you already , but thank you so much for this post. Its really helpful.

This will prove so helpful. Going all the way till there and not getting good pictures can be a disappointment. Unfortunately the only place one can practice northern light photography is only there.

Yes, this is what I was waitiing for. All those astro photographs includng nortehrn lights, start trails, and milky way are fascinating. But it takes some work to get them right. Thanks for ths guide.

Swati & Sam (The tales of a traveler )
Reply

Bookmarking and flipping this page as I know am gonna badly need this as we are planning a trip to Iceland in October this year. Hope to see Northern lights 🙂

Thank you! Good luck in October then! 🙂

Seeing the Northern Lights would be a dream come true for me. But capturing them on camera to share with family and friends would be awesome as well, so thanks for these tips! I really need to invest in a sturdy tripod. Bookmarking this for the future 🙂

Okay, what about I just hire you to come with me and take the photos?! Ha, but seriously, this is a great guide and I’m bookmarking it for the future. I am not a professional photographer by any means but you break this down perfectly. Thank you for sharing!

Absolutely loved this post! Super useful for someone like me who is hoping to catch them sometime soon. However, to me the most interesting part was the first picture of the light from Norway!