Paragliding in Iceland – the art of flying 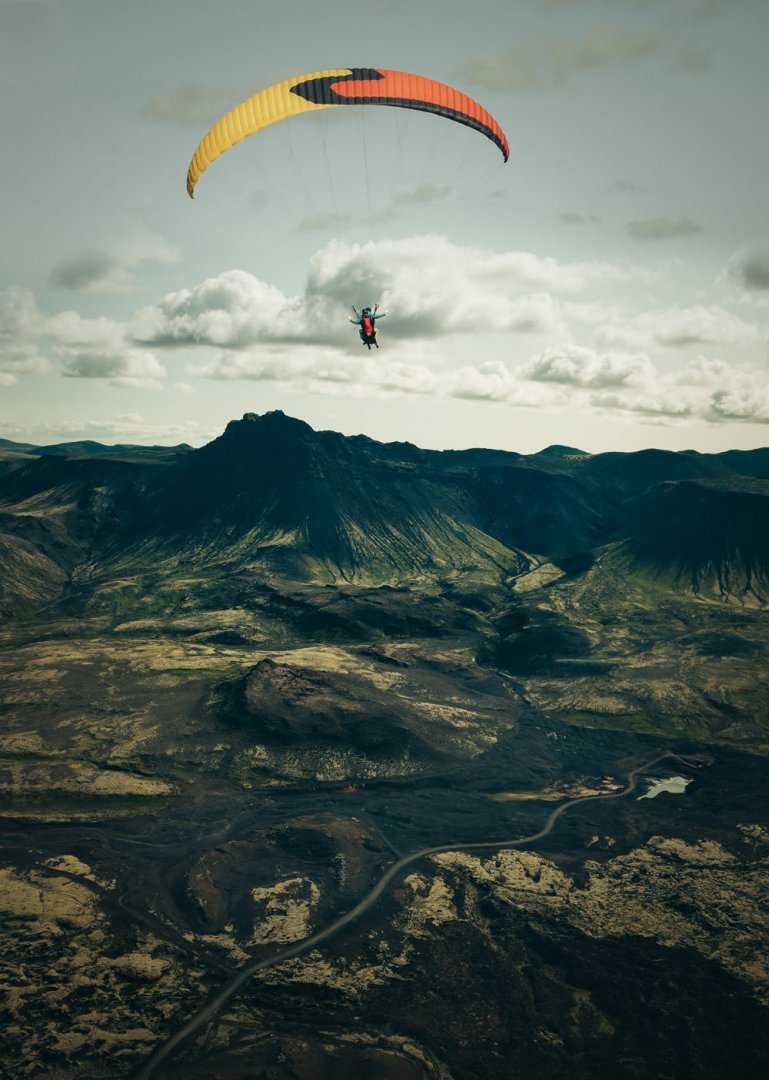 Paragliding in Iceland is definitely one of the most exciting activities we have ever experienced. The bird’s eye view on unearthly beautiful lava fields left us speechless. If you have an adventurous soul, you certainly have to give it a go!

Appetite comes with eating: how we ended up in the air

After our last adventure – a visit inside the volcano, we still didn’t have enough of an adrenaline rush. Thrihnukagigur awakened a huge appetite in us. An appetite to experience Iceland from a bit different perspective.

When we were wandering around the magical terrain which surrounds the volcano, we imagined how incredibly it all must look from above. We knew that sooner or later we had to satisfy our curiosity and see how Iceland looks from a bird’s eye view. At that time, we didn’t know that we would actually enjoy a similar view before long.

A few ideas for a flight were coming to our minds, but what was stirring our imagination most of all was a vision of paragliding. We couldn’t get rid of this exciting idea of flying freely in the air. We wouldn’t be ourselves if it all ended only in our imagination.

It turned out soon that our dream would come true. What’s more, we would be able to do it in our ideal location – just over amazing lava fields in the neighbourhood of Thrihnukagigur. In short, we did not hesitate even for a moment and immediately decided to set a flight date with Happyworld, a tour operator specializing in paragliding in Iceland. 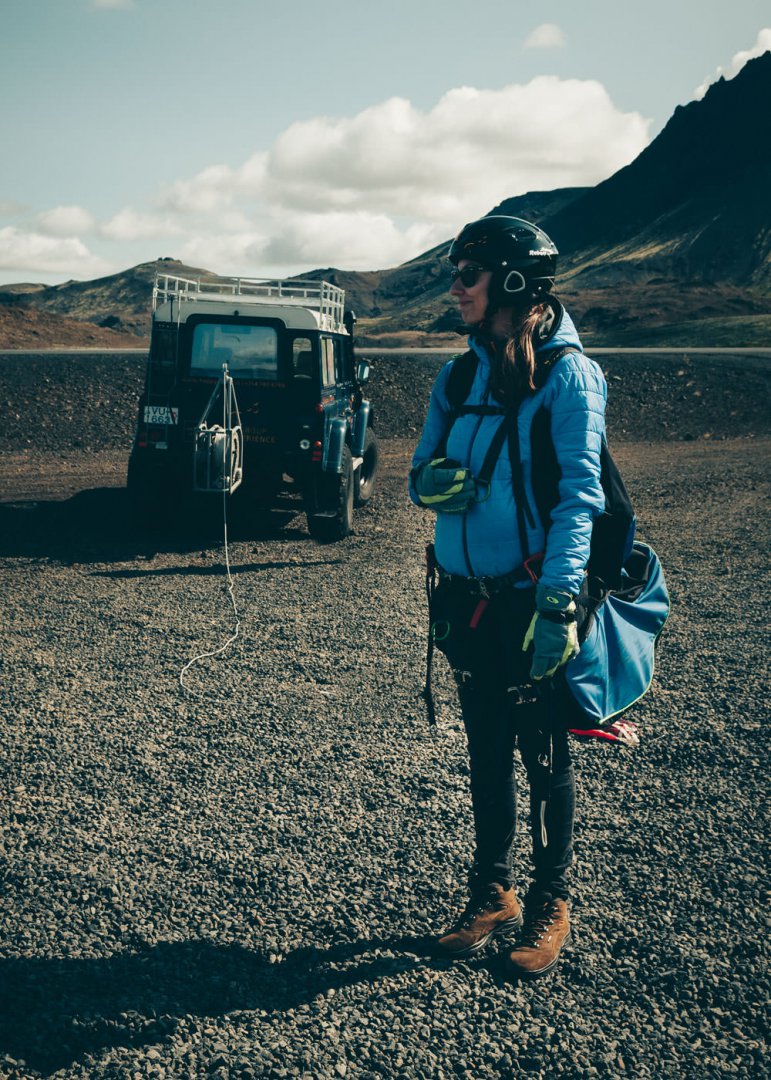 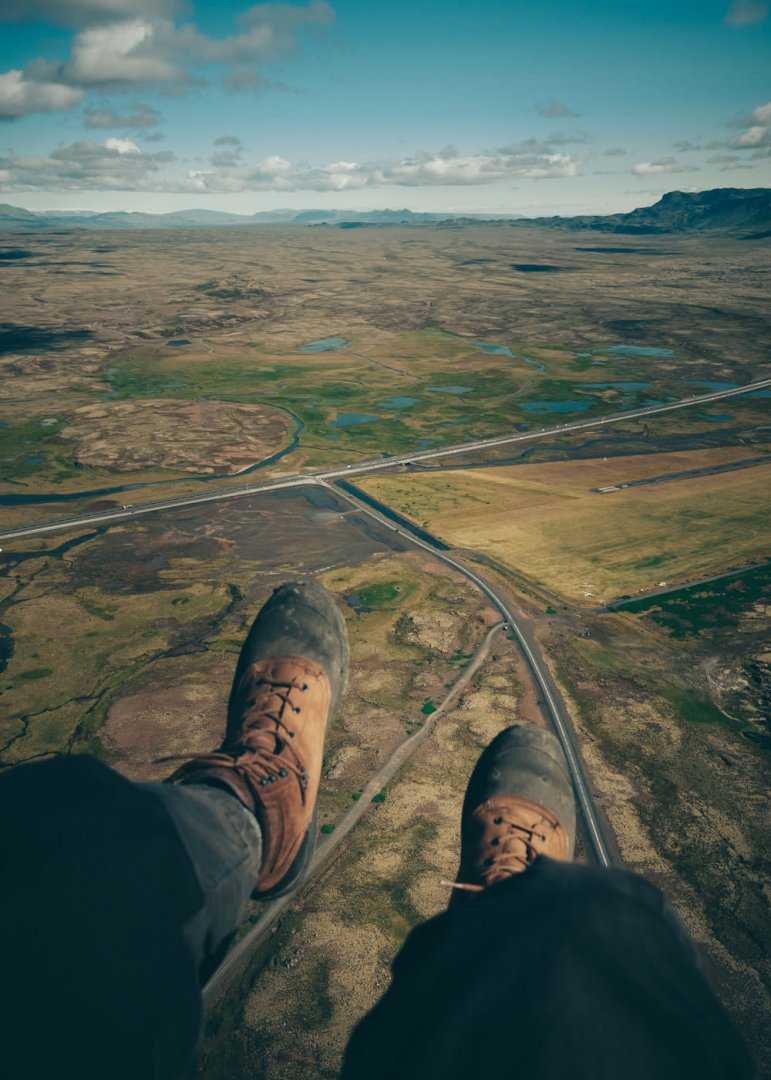 We will tell you a little secret. Just before the flight, the emotions, of course, were running high and we were a bit afraid. Fortunately, the fear dissolved in the air right in the moment when our legs get off the ground.

How fast we got into the sky was one of the things that surprised us most. Slow run and… wham! We literally swirled in the air after a few seconds. Then the airy dream began. It is really hard to describe the incredible feelings we had at the time. Many people have dreams of flying, but few make them come true. Paragliding is for us the purest way of flying. There is no noisy engine, and your whole body hangs freely in the air. Not many things on this planet can compare to it. You simply have to try it. And Iceland is one of the best, if not the best place on earth for flying. It is jaw-dropping!

Icelandic landscape from this unusual perspective is literally stunning. The lava fields close to Reykjavik are so vast that they seem to have no end. Whichever direction you look, there is something unearthly beautiful catching your eyes.

It is incredible that from just one point we could admire so many things: lava fields covered with intense green moss, intriguingly formed mountains, Reykjavik in the distance, and farther – Snæfellsnes peninsula with its majestic volcano. It’s a truly magical space. We repeatedly rubbed our eyes from astonishment.

Although the flight lasted around fifteen minutes, because of our euphoric mood it seemed to be much longer. Landing was as quick and smooth as starting. When we began to land, it was only a short moment and we suddenly walked on the ground regretting that it was the end of our sky adventure. 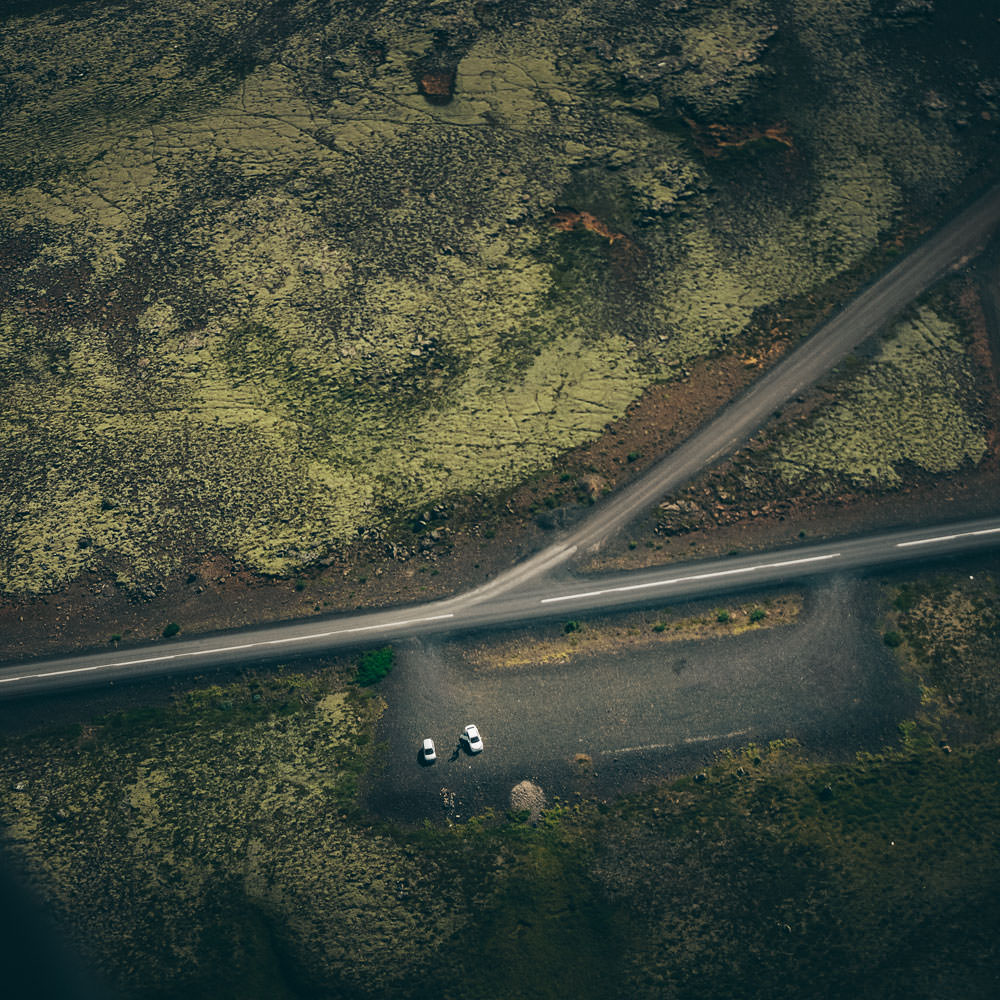 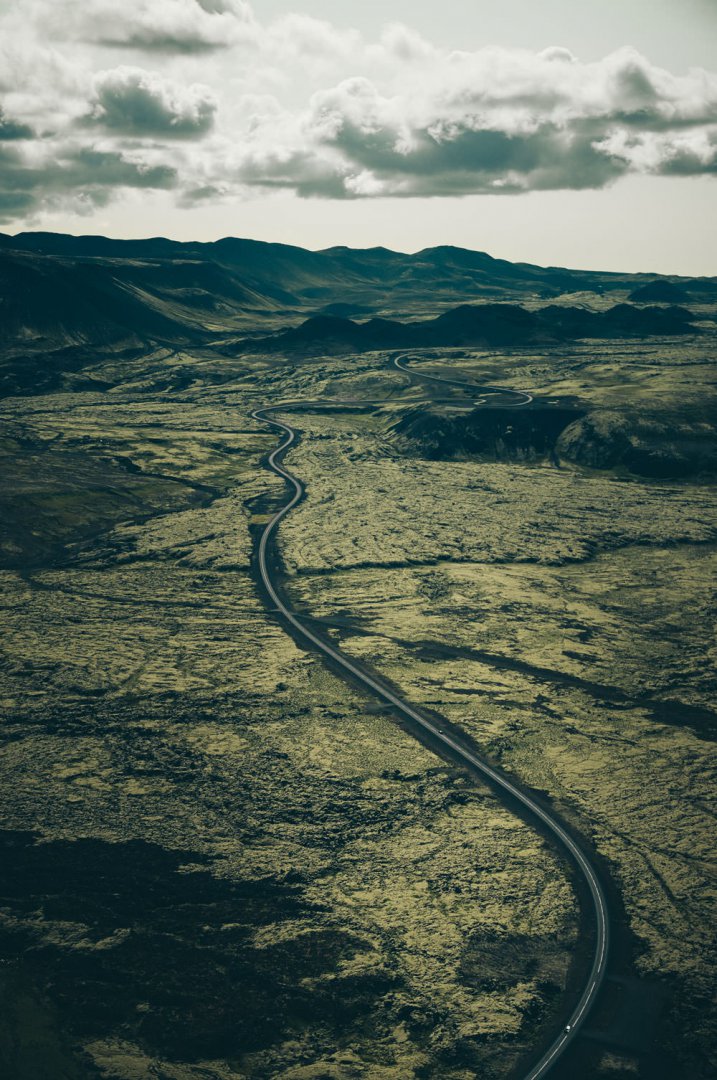 It all looks so exciting, but…

If you started to think about paragliding in Iceland, you probably have lots of questions. We will try to answer the most common ones.

Paragliding is not as risky, as many people think. Experts say that the risk is comparable to driving a car in a city. So it’s no more dangerous than what you are used to. If you’re still not convinced, remember that you will fly with an experienced and qualified instructor. In addition, they always have a parachute just in case.

Is paragliding for me?

If a vision of flying makes you smile, you definitely must try it. Many people wonder if they should take up the challenge. They think that to paraglide you should be young or very fit. Sometimes they are not sure if they are able to cope with their fear of height. None of these things!

First of all, you do not have to undertake any training before. You just should be reasonably fit. Secondly, there is no age barrier in paragliding. You can fly as long as your health allows you to take a leisurely run and experience ecstatic states.

Thirdly, even fear of heights is not an obstacle. I have to admit that I’m also struggling with it. Some time ago I was wondering if I would ever go paragliding because of my fear of heights. I was quite scared before the flight, but the instructors from Happyworld created such a friendly atmosphere that I could focus only on amazing experiences. 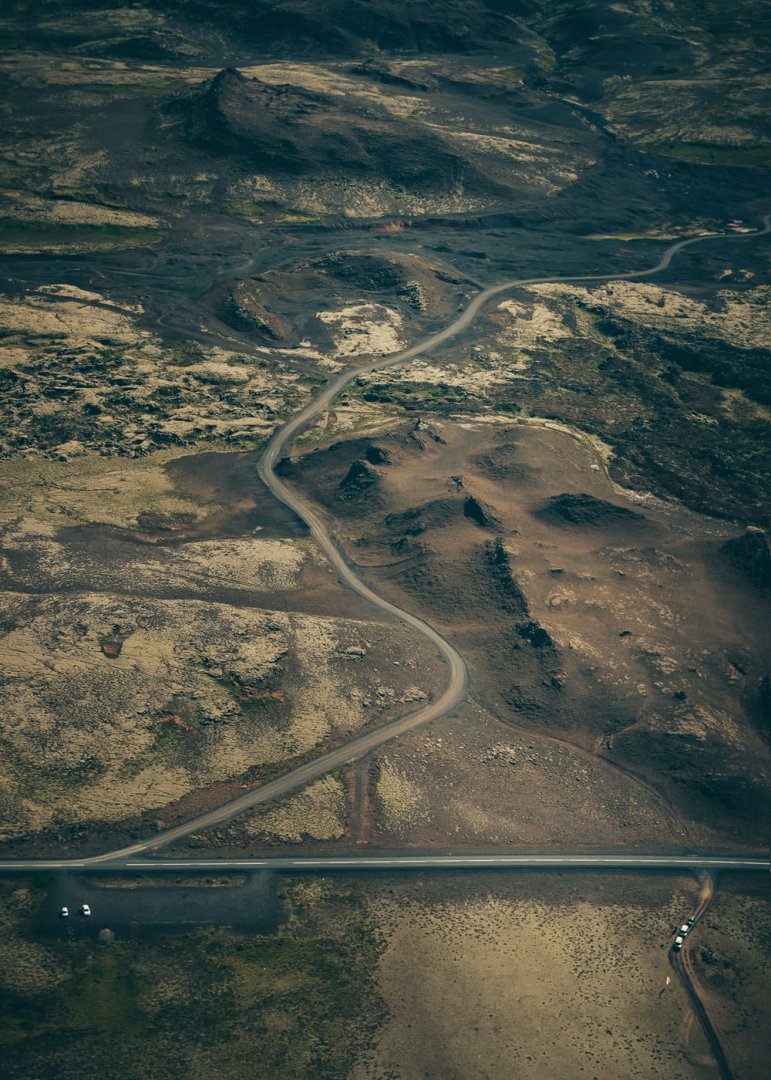 How to prepare for the flight?

You don’t need to have any previous experience with paragliding to try it in Iceland. You will get to know everything to make your flight memorable and safe before rising up in the air. The Happyworld team, apart from being very relaxed and cheerful, provided us with a solid knowledge base.

Do not be afraid to ask them about anything you are curious about. Ask even if you think your question will sound odd. When it comes to your clothes, put on some warm sportswear. It’s always a little bit colder in the air than on the ground. Don’t forget a cap, gloves and sturdy shoes.

When can you try paragliding in Iceland?

You can paraglide in Iceland all year round. Even in the winter conditions might be very good. That said, remember that weather in the winter is much more unpredictable than in the summer and there are simply fewer days when it’s possible to go paragliding. 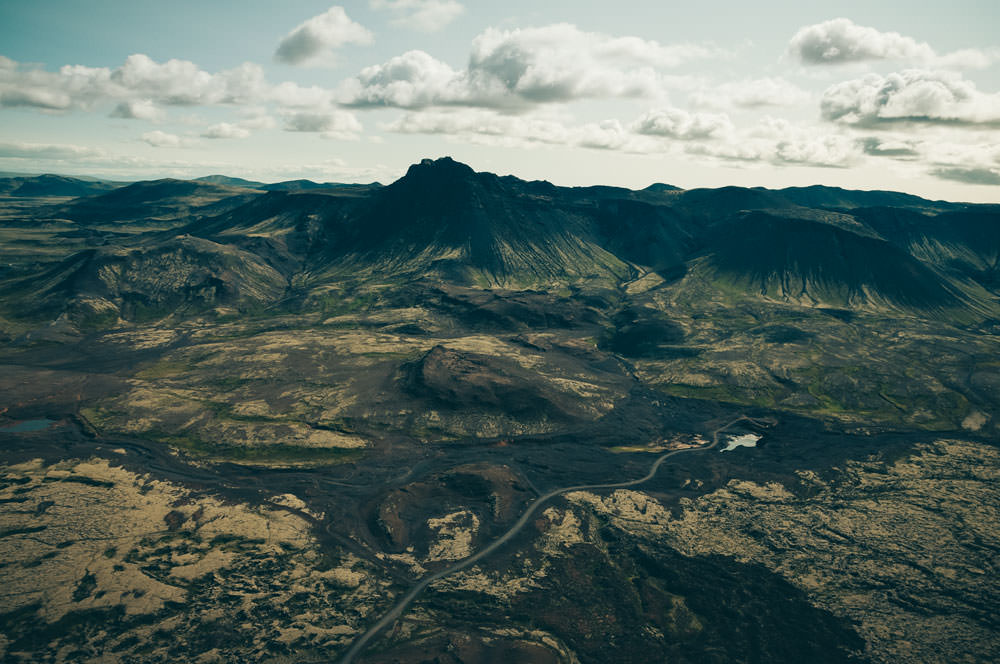 Is there any risk of my flight being cancelled?

Weather in Iceland even in the summer can change rapidly. In order to go paragliding a few conditions have to be met. First of all, it can’t rain. Apart from that it can’t be too windy, but it can’t be still either.

Of course, it’s impossible to predict the conditions on the day you would like to paraglide. It can happen that your flight will be cancelled. Then you can arrange a paragliding adventure next day or some other day. If there are no conditions for paragliding, but the weather is fine for a glider or small aircraft flight, then Happyworld team would be more than happy to take you up in the air this way.

Where can I try paragliding in Iceland?

Happyworld organizes paragliding tours in two locations. We had a chance to fly on the lava fields 25 km from Reykjavik (Bláfjöll area). If you are staying in the capital, then paragliding in Reykjavik tour is the best option for you. Apart from that, they also organize paragliding in Vik. In both of these places, the surroundings are equally spectacular. 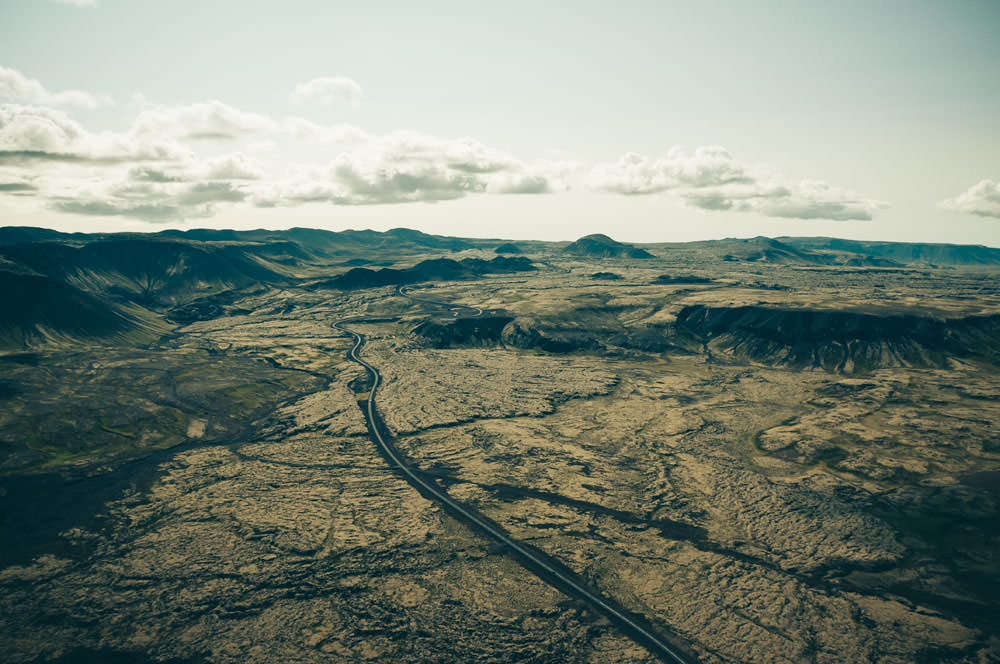 It was a day that we will never forget. We just wish we could do it more often. Now we have no other choice but to get a paragliding license. If you want to add some extra bite to your trip, you have to try paragliding in Iceland. 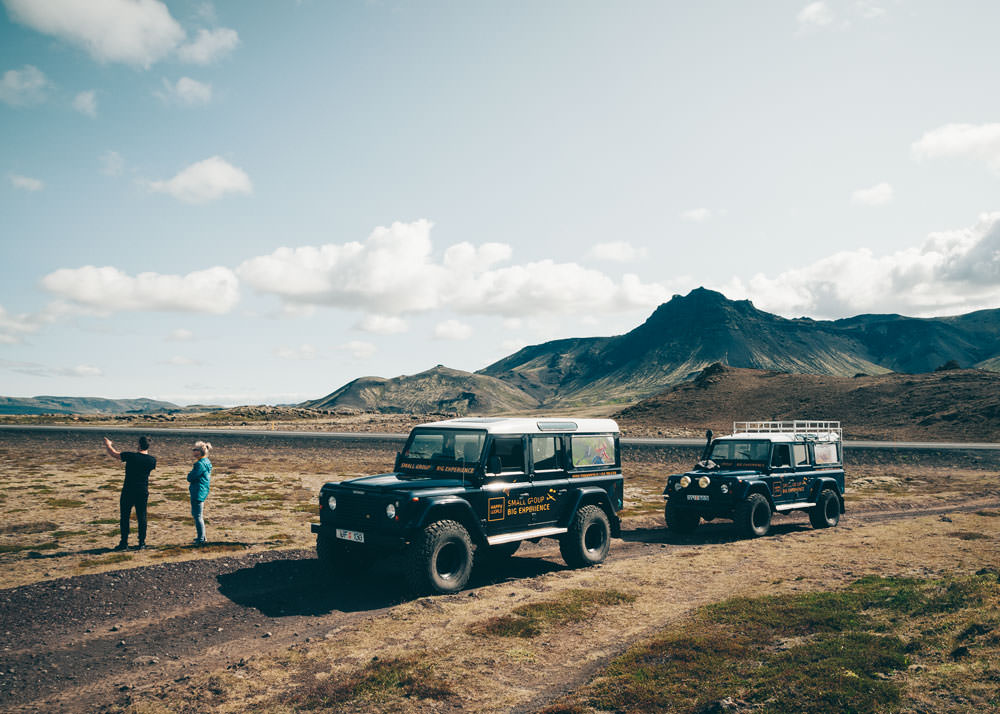 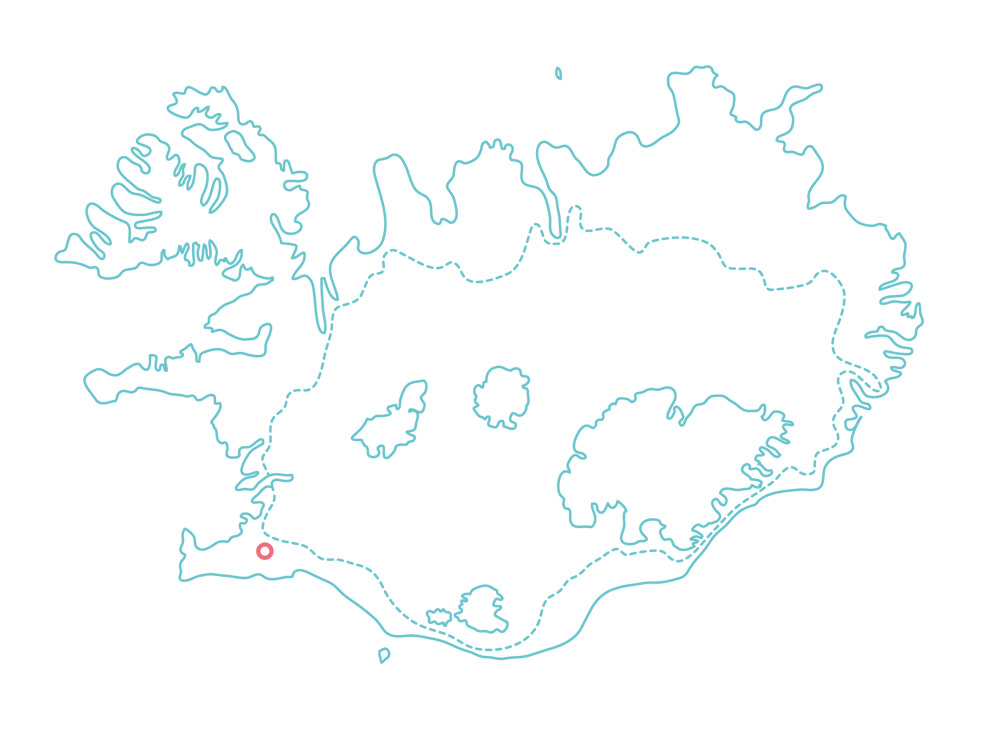 For more info on paragliding in Iceland, checkout Happyworld website.