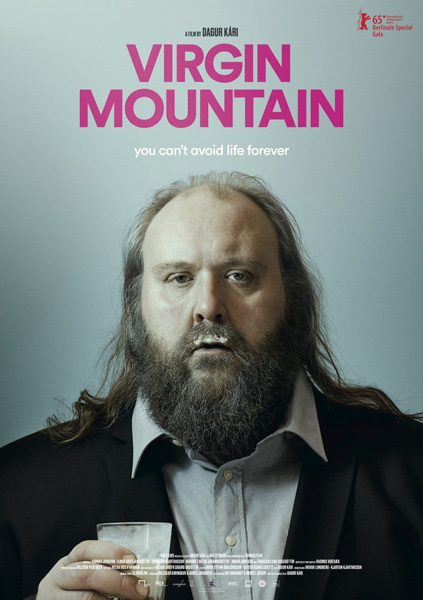 Director Dagur Kári is a well-known and appreciated artist, who definitely deserves a name of a real Icelandic culture ambassador. We love his previous movies such as a fantastic “Noi Albinoi” and “Dark horse”, so when we heard about his new film entitled “Virgin Mountain” (we prefer Icelandic title, simply “Fúsi”) we just couldn’t wait to see it!

It’s a story about a man called Fúsi, whose problems with reality are sizeable. If you dissembled his age, you would think that these are teenager’s troubles, but actually he is forty-three. Unattractive, distinctly overweight, taciturn, introverted, extremely shy, harassed and misunderstood by his peers. Dissociable. The situation is more complicated because someone doesn’t want him to grow up – it’s his despotic mother with whom he still lives. Their relation is weird, sometimes clearly toxic. So that’s how it is – Fúsi leads lonely, bleak and wistful life, where one of its biggest attractions is creating obsessively detailed second world war battle mock-ups.

What protects him from life’s toughness are his repeatable rituals. Every morning he eats a bowl of the same cereals, every Friday evening he consumes alone the same dish seating in the same restaurant, of course choosing always the same table. No new experiences, only predictable events.

Well, it might sound comfy, but it’s not and then suddenly his safe bubble bursts. Someone could think that it’s too late to change such an awful routine like his, but life abruptly prepared for him a big challenge. One tricky fellow, exactly a partner of his mother, wants to help with ending Fúsi’s solitude lifestyle. He decides to give him as a birthday gift a subscription ticket for a country dance course. As an addition to this, he gifts him a cowboy hat. Fúsi certainly doesn’t like the idea of going anywhere, especially in such a ridiculous and bizarre headgear. Under a pressure of his bossy mother, finally, he decides to attend the classes. This single decision gives rise to plenty of unexpected things and events. His life will never look the same.

There are some similarities between “Fúsi” and “Rams”, which we have reviewed recently. Apart from the fact that they have the same leisurely rhythm, in both of them in the beginning you can have an impression that this is going to be an unexciting kind of story. Maybe action is slow, characters super ordinary, but it’s totally hypnotizing! “Fúsi” is definitely a wonderful movie, in our opinion highly recommended! We left the cinema really impressed. It’s kind of a bitter-sweet story, very touching and so real.