There’s no Iceland without sheep. We are sure that every Icelander would agree with that.

Did you know that while travelling in Iceland, sometimes it’s not so easy to meet an Icelander, but you can’t keep off sheep? In this fascinating country, there are more sheep than people, far more. To be exact – three times more! We can guarantee that sheep concentration per square meter here is one of the largest in the world. In the summer time they seem to be everywhere.

For ages sheep have been the most important animals in Iceland. An evident sign of their importance is the fact that old Icelandic word fé (sheep) was also used for money. What’s more, an old-fashioned word féhirðir (a shepherd) nowadays also means a treasurer. To have a huge herd – it was a common dream for hundreds of years. If someone had a huge herd of sheep, it simply meant that he was wealthy, happy, and always pleasantly full. In many regions, life revolved only around a farm until the last days of the 20th century. No wonder that sheep were for Icelanders almost like a holiness. Besides, they proudly represented a traditional lifestyle. If you want to get to know more about this kind of special relation between sheep and Icelanders, watch an excellent Icelandic movie called ‘Rams’. We wrote about it a few months ago.

It might surprise you that Icelanders didn’t fish for a really long time. In this field, they had a lengthy break. With every century they were becoming far different from the first settlers, fearless Vikings, who weren’t scared by storms and ocean abyss at all. They started to fish regularly again only in the nineteenth century, and up to this point sheep had been the main source of their food.

During our long stay on the island (as for today we’ve been here for 18 months), we’ve had an opportunity to observe many local food habits. We have to admit that in the beginning they really surprised us. Many Icelanders love to eat fish, but the most beloved meal of the majority of them is definitely lamb. We are sure that when a buffet bends under the weight of delicacies from around the world, lamb will be the most popular among Icelanders. They are traditionalists when it comes to food, and rather don’t like to experiment in the kitchen. In short, at the moment when lamb lands on the table, every Icelander will be happy and satisfied. ‘A plate full of lamb, a few potatoes and what else would you need?’, most of them would say. 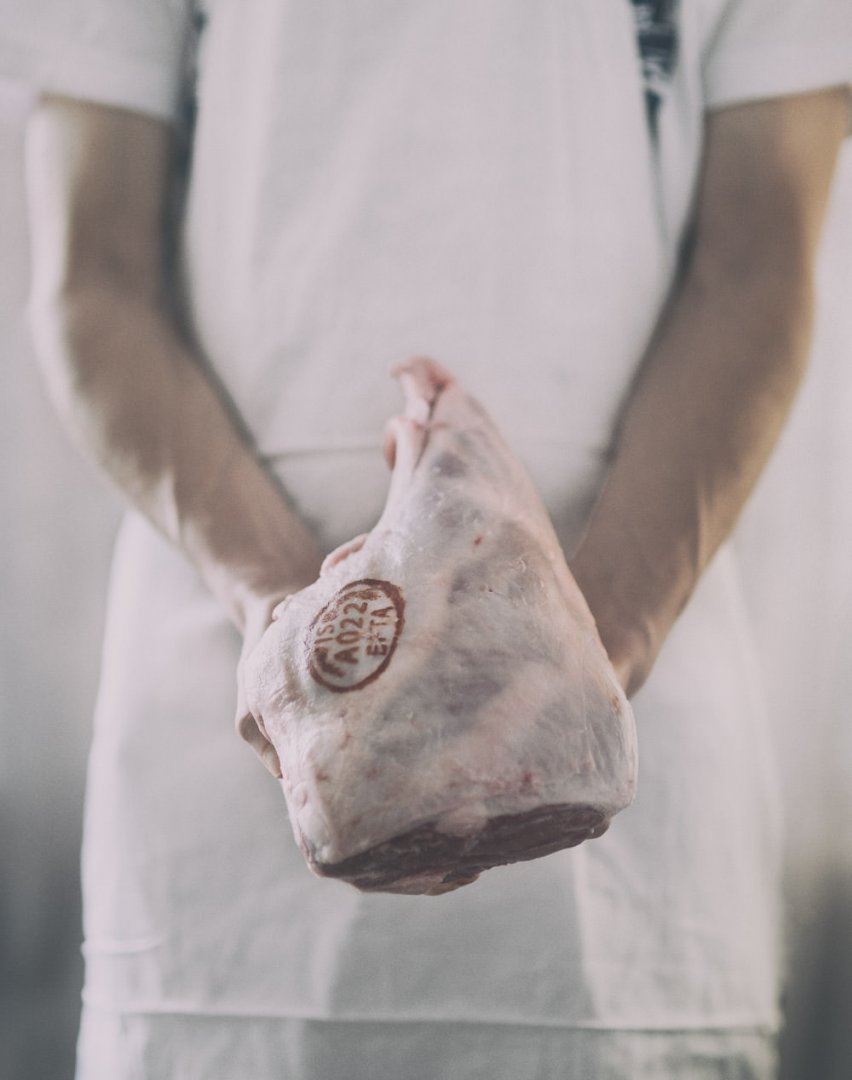 If you are visiting Iceland, you definitely should try the local lamb, unless you are a vegetarian. It said to be one of the best in the world. Icelandic sheep spend the whole summer pasturing freely wherever they want, breathing unbelievably fresh air and drinking so pure water. They eat the delicacies of the arctic tundra all the time – among other things angelica and arctic thyme. They are herded on the farms at the beginning of autumn and sheep round-up is quite an event in itself. It’s one of the most important days of the year for farmers.

Almost every Icelander who thinks about a Sunday dinner, will see a sizeable, well roasted, but still juicy piece of lamb, usually with sugar-glazed potatoes. Read on, and we will tell you how to prepare such a feast. Some of you may think that it’s a rather tough task, but none of these things. You just have to get a nice leg of lamb. It’s fairly easy to prepare, and the effect is really exquisite. We decided to enrich this dish with some truly Icelandic ingredients, which aren’t used traditionally.

Last summer we went crazy about berry picking. Tundra has to offer a lot of treats, so apart from berries our baskets quickly got filled with arctic thyme as well. This interesting plant has not much in common with thyme commonly known in Europe. Arctic thyme has different, but so pleasant aroma and beautiful purple hue. The second component, which gave our lamb an amazing flavour was Icelandic crowberry sea salt. It has an unusual purple colour, so when you add a bit to any dish it will present really extraordinary.

If you would like to try a traditional version, then all you need is a thick and rich gravy and Icelandic sugar-glazed potatoes. It goes well with sweet-sour red cabbage. And if you are in the mood for something more modern, it tastes great with mint pesto. 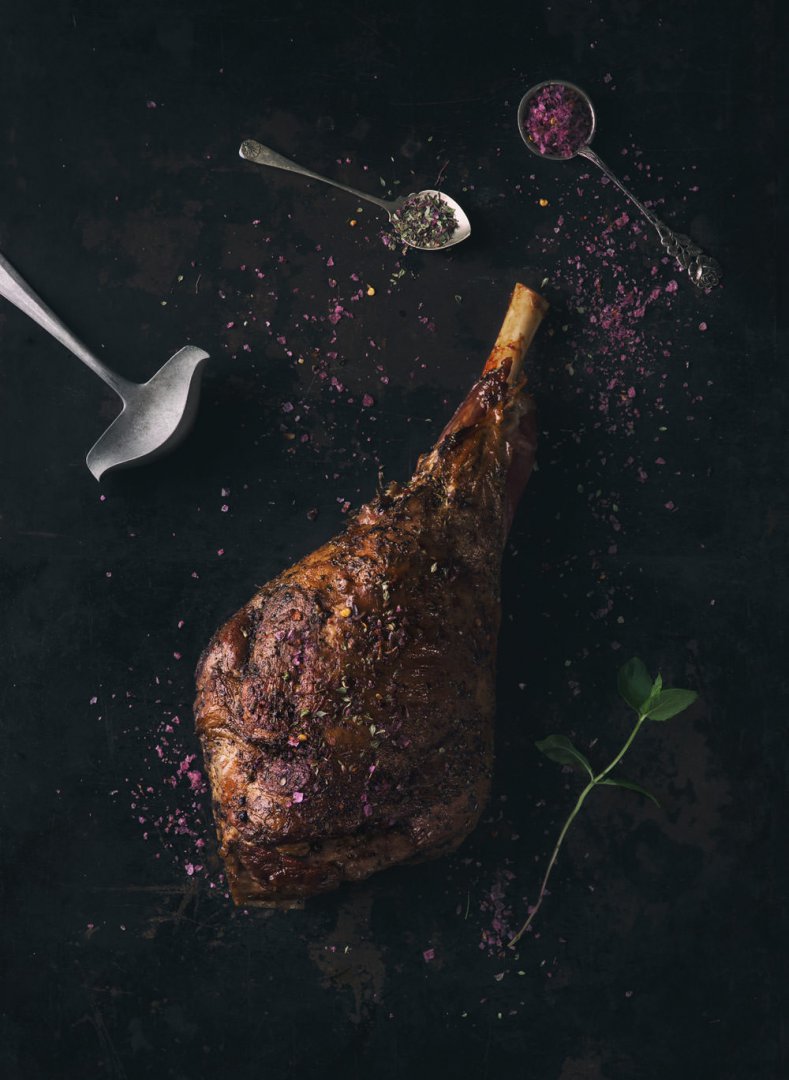 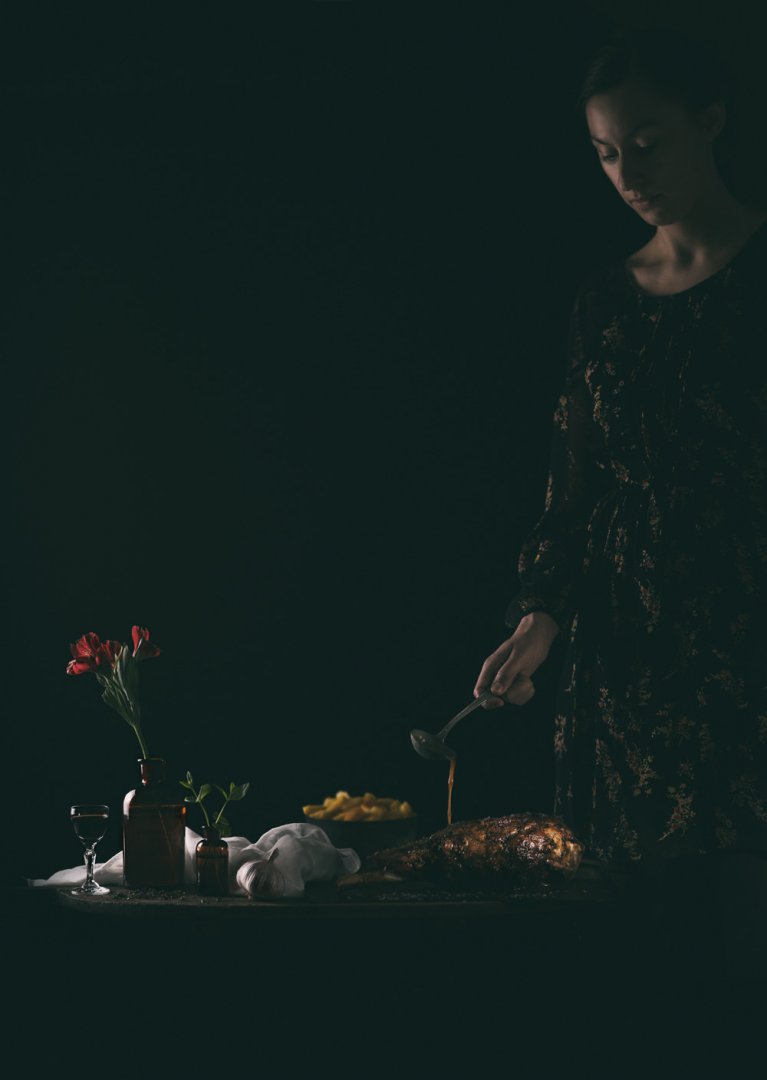 If you wonder what else to try while travelling around Iceland, check out this Guide to Icelandic food by Kavey (Kavey Eats).

I was not expecting a recipe here 🙂 Looks and sounds absolutely delicious. Since you’ve been staying in Iceland for over a year, I’m sure you would have got several opportunities to try it out yourself by now.

It’s really unexpected to me that Icelandic people didn’t fish for a while. It seems like most civilizations on the water use that as a main food source, so that really surprised me. Though I guess when you have lamb recipes that look so delicious, maybe they didn’t need it? Now I’m hungry…

Oh I am so envious! I haven’t explored the rest of your site yet, and I will, but how did you end up staying in Iceland for an extended period? I drove the ring road a few years ago and most definitely saw more sheep than people, and I was very much ok with that! I can’t wait to read more about your adventure! The recipe sounds incredible. Bookmarked!

Thank you! We simply fell in love in this country and couldn’t leave 🙂 That’s why we found a job and stayed there for so long. Right now we are in Poland, but we are coming back to Iceland in May for another 6 months. This time we’ll be staying right next to Eyjafjallajökull, the famous volcano which erupted in 2010 and stopped all flights in Europe. We just can’t wait 🙂

More sheep than people… that’s great! And that recipe sounds delicious! I would love to try that.

Iceland is the country out of our Nordic neighbors that I know the least about actually. I did know that they had a lot of lamb and sheep. What I did not know was that it was so much of it. Thank you for the lesson. 🙂

I love lamb as much as the Icelanders. We actually hope to visit Iceland later this year. I guess a good way to prepare is roasting up some lamb. Thanks for the recipe too.

How interesting. You must be able to see sheep everywhere you explore with SOO many there! I have only eaten lamb once before. We love trying new cuisines and I especially like bringing home a recipe as a ‘souvenir’. This lamb sounds like something wonderful to try!

This makes me feel a bit sad because I don’t recall seeing one single one of them when I visited Iceland. Where were they? It was October. I guess I’ll have to go back and see if what you say is true 🙂

A recipe was quite unexpected!
I don’t particularly like lamb’s meat, at least in Italy it’s a tradition to eat it on Easter, lamb’s ribs, but well, I usually eat something else.
Due to the temperature out there, what else they can manage to breed?

I saw the first picture and I went aww looking at that ball of wool! Though of course given our vegetarian preferences, I would not go ahead with the recipe. Maybe I could try out a veg version.

Looks like lamb is super important to Iceland! I didn’t know there were do many in Iceland! I guess all that wool would keep them warm, though 😛

I was going to comment on how absolutely adorable that sheep on the road was and then the article took a turn lol! I feel guilty now but I have to say that looks delicious still. Iceland looks like a beautiful place.

I really enjoy seeing sheep roaming around. Sheep are adorable with their wooly coats. They must keep themselves warm.

Well this is really fascinating and there is another place with the same incredible thing, it’s called Sardinia, a Italian Region in the middle of Mediterranean Sea! There are more sheep than people, this is the place where I come from… 😀 thanks for sharing, interesting read

I didn’t know that in Sardinia there are also more sheep than people. Italian food is so delicious, so I guess that Sardinian lamb dishes must be excellent.

definitely wasn’t expecting a recipe! That’s an awesome integration into this post. Will be sharing with my best friend who is a MUCH better cook than I am haha

Oh, what a timely post. One item in my bucket list is to see the northern lights this 2017 in Iceland. I didn’t know that there are more sheeps than people in there! Haha. Since I am no longer a vegetarian, must try their lamb. It seems that they do deliver tasty dishes over there!