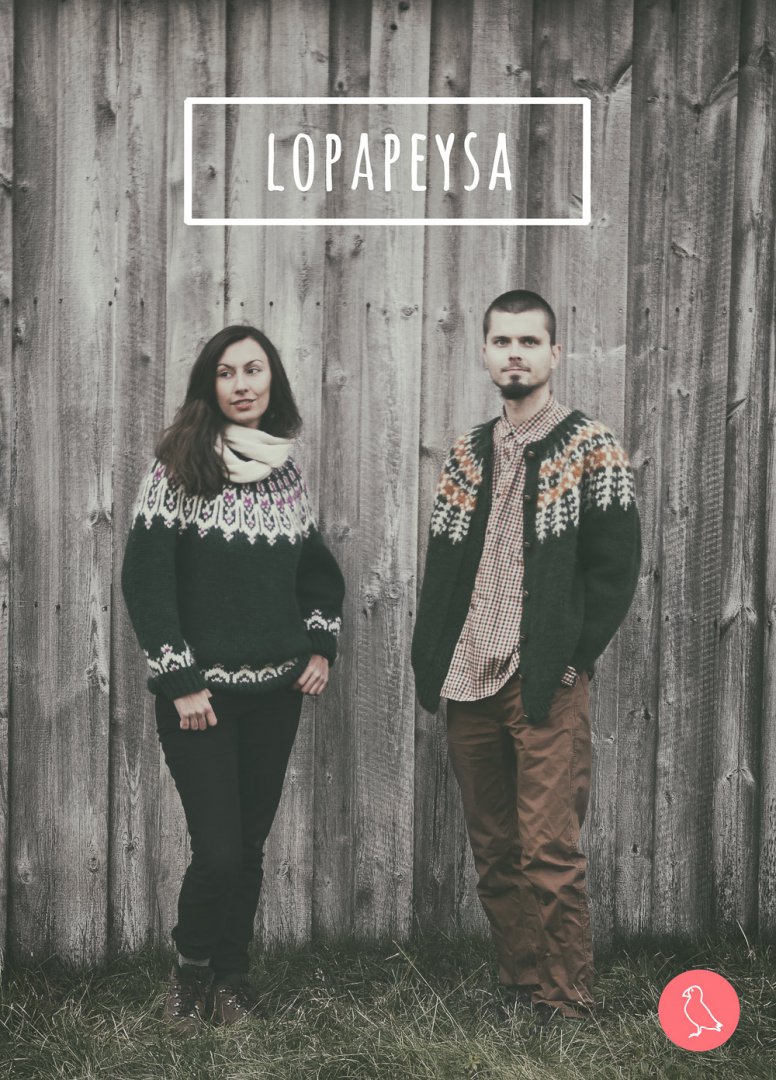 Iceland and bad weather – they are quite an inseparable couple. But don’t worry, you can quite easily handle it. Just throw on appropriate clothing. Hmm… but what should it be? If you ask any Icelander, everyone would answer without hesitation:
– Lopapeysa!

During your stay in Iceland (no matter if it’s summer or winter) you can notice that Icelanders wear very distinctive sweaters. Thick, slightly puffy with an interesting geometrical pattern, which goes around the neck. These are so-called lopapeysur (plural of lopapeysa). Lopi means wool, and peysa – sweater. Characteristic patterns derive from the Icelandic Sagas and they ward off evil spirits. Since the beginning of the 20th century, every Icelander wears (or at least owns) a lopapeysa, even babies. If you go for example to some local concert, you’ll see a sea of lopapeysur.

Lopapeysa is something phenomenal, a kind of an Iceland’s icon. Without any doubt, it’s both stylish and really practical. When you put it on, you start feeling so pleasant and warm that awful weather becomes just unimportant. It is just a fantastic, reliable weapon against cold, in addition to some degree waterproof. 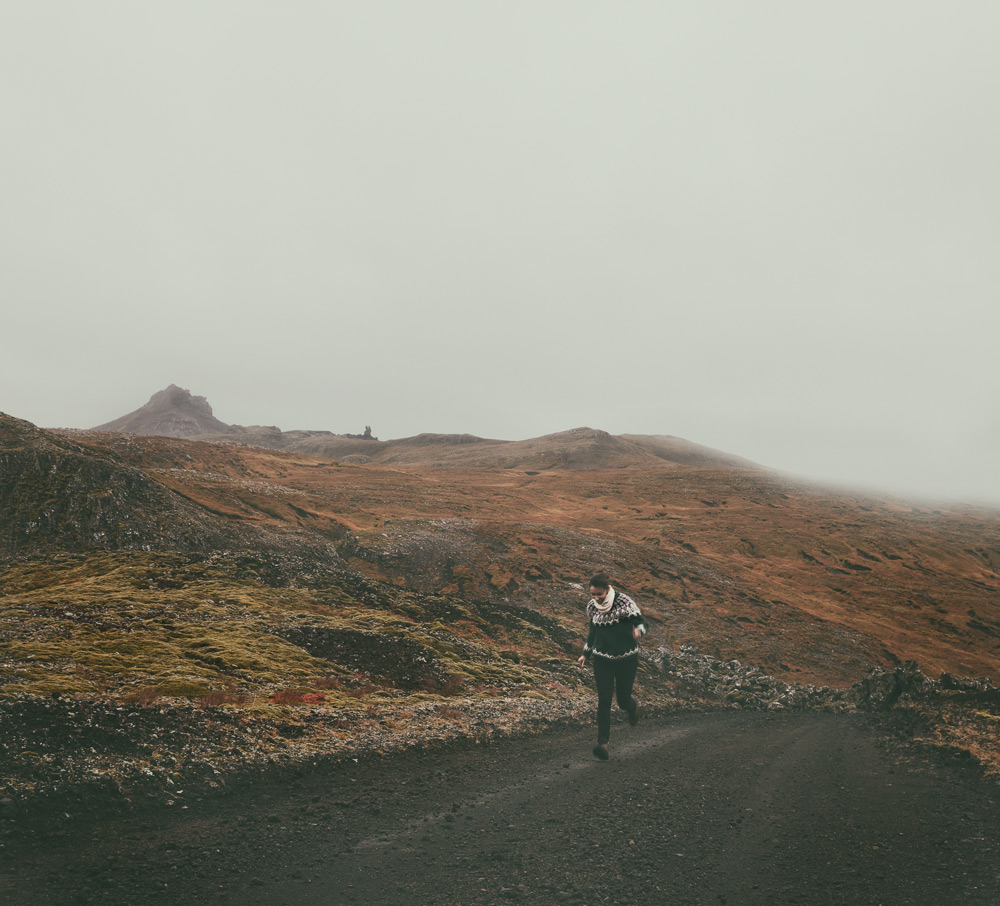 Knitting is like a national sport in Iceland. Icelanders have been passionately knitting for centuries and it’s something very natural for them, as natural as breathing, especially for the older generation. This relaxing activity is eagerly echoed by foreigners who stay on the island for a longer time. During our stay in Iceland, we’ve got to know quite a large group of knitting enthusiasts and trust us that they do not leave their yarn and needles even for a second. We’ve even been to parties, where the main attraction besides small talk, was knitting. Believe it or not – in Iceland, it’s common to see someone knitting even on a plane.

Icelanders make lopapeysur using wool called lopi. Lopi is so unique because of the crazy circumstances in which it came to graze Icelandic sheep. Wild downpours, storms and violent weather changes developed the ability to produce two types of hair. The outer coat in Icelandic is called tog, inner – thel. Tog is long, stiff and naturally saturated with fat, its task is to protect against unfavourable, Icelandic aura. Thel is short, extremely soft and sensuous due to the fact that it serves as a kind of insulator.

For centuries people have separated the individual fleece, making almost indestructible threads, cords and ropes from tog and producing underwear and clothing from thel. At the beginning of the 20th-century, textile experiments began in Iceland. As a result, Icelanders combined these two types of fibers. Clothing made from the new invention had amazing properties; what’s more, it was warmer than usual.

If you take your lopapeysa to a bonfire party, you don’t have to worry about staying too close to the fire. Lopi wool doesn’t burn, it only broils lightly, so there will be no holes, no worn out clothes.

Have a look at our original Icelandic fine art prints!

Having a lopapeysa is a dream of many people who had an opportunity to see them. It is also the best souvenir you can bring home. Unfortunately, these sweaters are terribly expensive, their prices revolve around 22 000 – 26 000 kronor (150-200 EUR). However, there is a way to get the coveted lopapeysa and not to undermine significantly the budget.

You can get 5-6 times cheaper lopapeysa in Icelandic second hands, which belong to Red Cross (Rauði krossinn). Many of them look really like brand new, thanks to their excellent quality. If you can’t find Rauði krossinn during your trip just ask the Icelanders. We’re sure that they will be able to help you because they really like to shop there. These shops are based on the form of voluntary work, so in many places, they don’t work full-time.

One hint – search in smaller towns, as Red Cross in Reykjavík is more expensive and really popular even among tourists. We found some fantastic lopapeysur in Akureyri and Egilsstaðir. And if you notice that on display there are only a few sweaters, don’t hesitate to ask if they have any more. Typically, the rest is waiting for their turn in the stockroom. Once, when we couldn’t find anything for ourselves, a nice lady from Egilsstaðir’s Red Cross invited us to the stockroom. Oh, those were the bee’s knees, totally fantastic hunt!

Another way to get your longed-for lopapeysa is to become an avid knitter and create a beautiful sweater with your own hands. This requires a lot of patience and practice, but just think – to have a lopapeysa which you made yourself, doesn’t it sound fantastic? You’ll find the hanks of lopi in fabulous colours in almost every Icelandic supermarket (we recommend Netto). We aren’t the best at needlework, as we don’t have enough patience to learn it, but we regularly look for bargains in Red Cross. This way, our modest collection gets bigger.

Extraordinary lopapeysur are waiting for you, so remember – where there’s a will, there’s a way. Let the hunt begin! 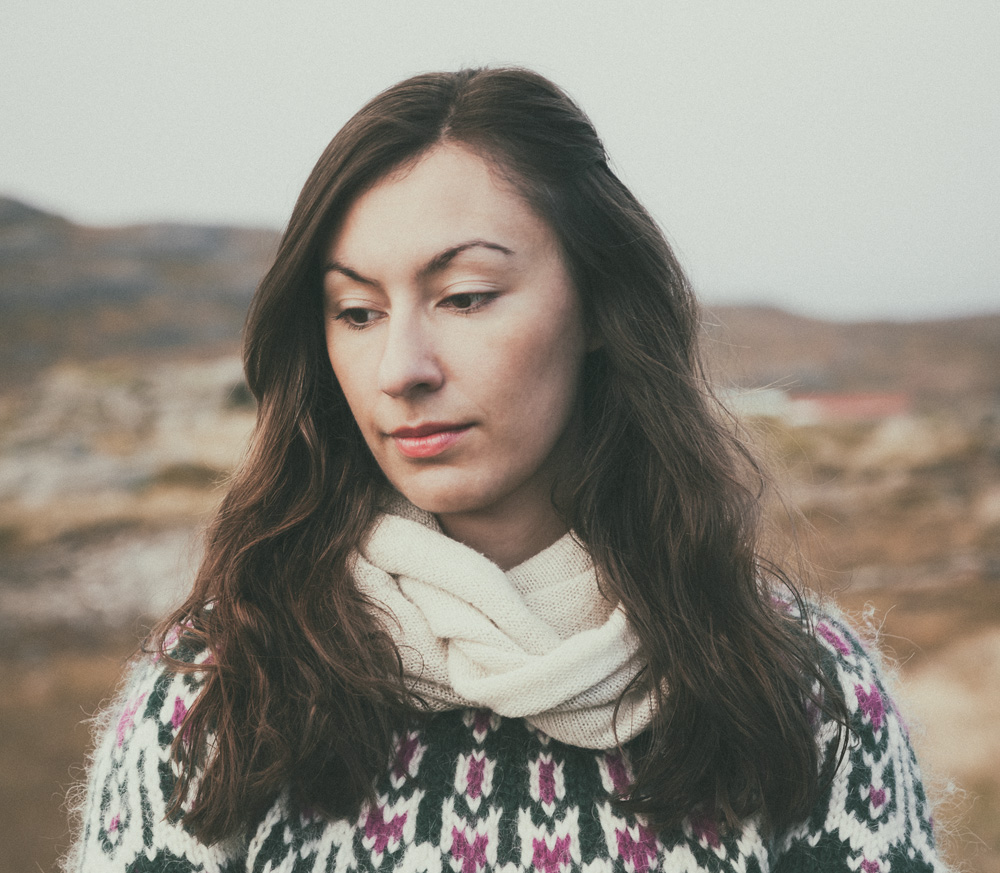 I used to hate these sweaters when I was a kid and my mom insisted on giving them as a present! But as time went by I learnt to love them and starting using them again when I moved to Europe. Now I am being the mom giving these to her kids. Not sure if they loved them or not, but they do feel protected during the cold Winter mornings here in Milan. I had no idea there was so much behind them, interesting read.

It’s funny to read that knitting is a national sport in Iceland. I can almost imagine everyone sitting by the fireplace, in the long cold winter evenings, knitting. The lopapeysa sounds like a perfect jumper for me. I always complain that I am cold and I didn’t find yet the perfect warm sweater that can solve my problem. 🙂

What an interesting read! In Norway we have similar jumpers, but with different patterns. I had no idea that they originally were made to ward off evil spirits though! Thanks for sharing 🙂

As a Canadian I am intrigued by this for three major reasons. We freeze, and these are extra warm….must.buy.one. Two, they don’t burn near the fire?? And three, the geometric patterns to ward of evil spirits is amazing. Love this!

Buying them second hand seems like the way to go since second hand is better for the environment, cutting down on waste and on your wallet. They remind me of the Cowichan sweaters from Vancouver Island. I wonder how many cultures have their own style.

Sweaters are not part of the way of life where I was born (In South India) and definitely not where I live now (Middle east). But I’d love have one of these on my many mountain trips in the Himalayas. 🙂

As someone has previously stated in the comments, when I was a kid, I DESPISED having to wear these kind of sweaters but as I’ve grown older (and perhaps a little more hipstery) I now think they are really cool. Although really, in Iceland, they are a necessity more than anything. And love the third photo in this post, a really stunning snapshot of Iceland although even from here, it makes me shiver just a little bit!

I’m just in need of a new sweater in these days so this article comes at perfect timing! The only problem, MAYBE, is going to Iceland to find a nice and warm lopapeysa to wear without caring if the weather is cold or worse! I also lived in Canada so I know how can be useful a good sweater when the temperature drops!

It’s a shame to see skills like knitting and blacksmith become less an less prevalent. I remember my grandfather did tailoring and had a garden. I just go to the grocery store.

The sweaters are lovely and their geometrical designs really beautiful. I was reminded of the sweaters that I used to wear to school which were specially knit by my mom.

Whoa!! Where exactly is that place? Looks amazing. Thank you for sharing such beautiful place and sweater!

Indians also love knitting a lot. A practice that they picked up from the colonial rule of England. How much are the Lopi yarn balls for? We can get them and knit our own sweater instead. Really loved your article.

Very stylish and elegant!
The patterns are good. They will pair off well with any dress.

Absolutely loved this post and the aesthetic of your pictures! This is such a fascinating concept to me considering that I can never properly wear sweaters. Looking to pick something like this up!

I love how you said “Knitting is like a national sport in Iceland.” ???? Clearly, they are very serious about their lopapeysa. It sounds like a very practical and useful piece of clothing. Must agree with the others that this wouldn’t have been something I would’ve worn when I was younger, reading the story behind it as well as understanding how it is a part of the Icelandic culture makes me want to pick up one as a souvenir when I visit Iceland. Thanks for sharing.

I like how you’ve provided a precise details about Lopapeysa. I am anticipating for a colder weather coming this Christmas season, I might find some online. Excited to wear one soon. By the way, never think that knitting could be a sort of sports, until you mention it here. That’s really cool!

I love these sweaters for Xmas actually, so cosy. And also for skiing holidays! Your photos are stunning. Love the colours 🙂

I would some day love to own some lopapeysa. Must be useful in the Himalayas too. The knitting thng sounds a bit nostalgic to me. Older generatons here too used to knit. I had a few such sweaters as a kid. But nowadays nobody works that hard and just buys something from the store.

Love these sweaters and this post! I can’t wait to look at more of your blog! Iceland is hands down one of our favorite destinations to date! Your pictures made me so nostalgic!

Wow those sweaters look so warm and comfy. We can’t wait to see the gorgeous rugged landscapes of Iceland. And now we know just wha to wear. Thanks for this post.

It’s so nice to hear about something so resourceful and ethical about a product. We could really learn from this example. Just proves that looking stylish and comfortable without harming our environment is definitely possible! The photos are beautiful too!

I haven’t been in Iceland but def on the list. Will def keep this on my mind when I get there! I loooove the designs! <3

I did not know that Iceland was known for its knitting skills. Interesting how the wool there is fire proof. Glad that I learnt something new today. Thanks for the post.

Nice to discover this new thing of the stunning country. I would soon be there hopefully to see the Northern lights would surely consider this.